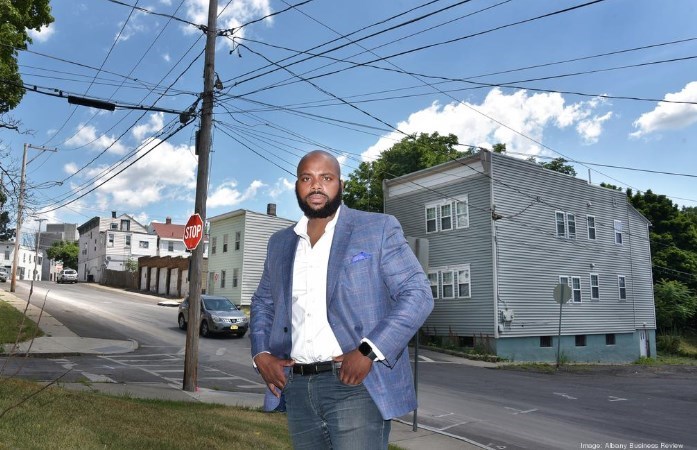 When Jahkeen Hoke looks around where he grew up in Albany’s South End, he sees a neighborhood with a long history of ethnic and racial migration, homes filled with working-class families and small, local businesses.

He also sees vacant lots, abandoned buildings, empty storefronts and other signs of how conditions have deteriorated.

“I’m a third-generation South Ender,” Hoke said. “The majority of what I’ve seen change is the amount of investment that has not happened. When people moved out, no one continued to invest. Without investment things become dilapidated, some bad players move in or things get kind of dismissed. It’s a snowball effect.”

Hoke is chief development officer at South End Development LLC, which was started about five years ago by Corey Jones, a neighborhood resident who has a vision for how to create more opportunities for more people to live and work there.

The boundaries include 32 parcels on 2.4 acres — many of which are empty one- and two-story homes that South End Development has acquired in recent years.

“What the neighborhood is missing is people that see and have an appreciation for the neighborhood and have a vision,” Hoke said. “Our vision is a long-term plan. We don’t look to be a developer that looks to invest and sell to an investment fund. We’re going to employ the people in the neighborhood, so that this project, even if they don’t live there, they shop there, they work there.”

Jones unveiled the project, called The Seventy-Six, almost two years ago to local residents. There were mixed reactions about the size and design for what was then-described in a flyer as a “gated community.”

The plans have changed considerably since then based on the feedback, Hoke said. For instance, instead of four seven-story buildings, the one facing Second Avenue would be five stories and set back farther from the property line. The layout takes advantage of the topography, which has a 40- to 50-foot drop in elevation.

“If you look at the building from Second Avenue, it will look almost like a four-story,” Hoke said. “Most buildings on Second Avenue are three or three and a half stories.”

Parking would be below ground. The rooftops would have solar panels, and the apartments a passive solar design. The developers want to achieve “triple net-zero” consumption of energy, water and waste.

South End Development is asking the city to rezone the properties as “mixed-use campus/institutional.” The request is being reviewed by the planning board.

Jones’ background is in construction management. Hoke, formerly a member of the Albany Industrial Development Agency, has a background in finance. Their consultants include Chazen Cos. of Troy; Garrison Architects of Brooklyn; and attorney Stephanie Ferradino at The Wagoner Firm in Albany.

Funding would come from a variety of sources, including private equity, bonds issued by the state office of Housing and Community Renewal, tax exemptions from the Albany IDA and a New York State Energy Research and Development Authority grant.

“Our financial stack right now is very solid,” he said.

The size and scale of the project is on par with the $110 million-plus that was spent by Albany Medical Center, Tri-City Rentals and Columbia Development to clear more than 70 homes in the Park South neighborhood and replace them with medical offices, more than 200 apartments and a parking garage.

Hoke knows one of the challenges of investing in the South End is the perception it’s unsafe. There is street crime. But that’s not the whole story. And the recent nighttime violence that broke out after the peaceful protests over the police killing of George Floyd in Minneapolis shouldn’t be an indictment of the whole neighborhood.

“What happened down there is no different than what happened in other cities across this country where people protested and went off the tracks and got bad,” he said. “That is not indicative of the people that live in the South End. That could have happened in Pearl Street in the middle of downtown. It just so happens the courthouse and the police precinct are right there [in the South End]. These are not the hard-working families that get up every morning and go to the Capitol and the hospitals and the stores to work. These are people that came out with an agenda and it happened right there.”